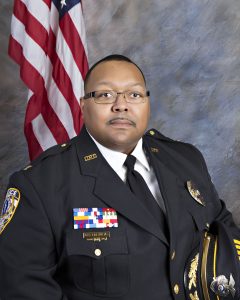 Chief Arthur Ealum JR. is a native of Evansville, Indiana. He started working for the Owensboro Police Department in April, 1991. Chief Ealum was promoted to Sergeant in 2002, Lieutenant in 2004, Captain/Major in 2008, Deputy Chief in 2010, and Chief in 2012.

Chief Ealum is a certified instructor through the Kentucky Law Enforcement Council and he is an Adjunct Professor at Owensboro Community and Technical College. His law enforcement memberships include: National Organization of Black Law Enforcement Executives, Kentucky Association of Chiefs of Police, and the International Association of Chiefs of Police. Chief Ealum stays active in the community as a Board Member for OASIS, a Domestic Violence Program and licensed Women’s Substance Treatment provider for battered women and/or homeless, chemically dependent women and their dependent children.

The Chief of Police is responsible for testifying before the City Commission and other legislative bodies on law enforcement matters of importance to the City of Owensboro; and, proposing new or amending existing policy and legislation which could have an impact on law enforcement.

The Chief of Police attends the City Commission meetings to keep that body informed about any issue related to the department’s operations and to respond to citizens’ complaints or concerns.

Also, the Chief of Police acts on all matters related to disciplinary issues and recommends awards for exemplary conduct of the department’s sworn and civilian employees.

In addition, the Chief of Police makes presentations to citizens’ community groups, religious organizations, schools, and the business community to promote the goals and missions of the police department and to solicit their input in making the City of Owensboro a safe place in which to live, visit and conduct business.

During a state of emergency, the Chief of Police assumes a leadership role in planning, coordinating and directing all activities aimed at restoring peace in the city or otherwise returning conditions to normal.

The Chief of Police has jurisdiction within the City of Owensboro and line command authority over sworn and civilian employees.